1. We're in a Housing Crisis and Missing Middle infill of neighborhoods is urgent

How does the Thurston County Planning Council describe our situation in 2019?        (below, UGA = Unincorporated Growth Area)

Buildable Land: Here is the report. There is enough buildable land in Olympia to accommodate predicted population growth until 2035.

Housing Units Built: Here is the table. By 2019, Olympia has seen 15% more housing units created than what was modeled, and in the UGA of Olympia, 5.5% more.

Housing Types: Here is the report. The types of housing needed by Olympia's population won't change significantly by 2045 (Table 12  below). 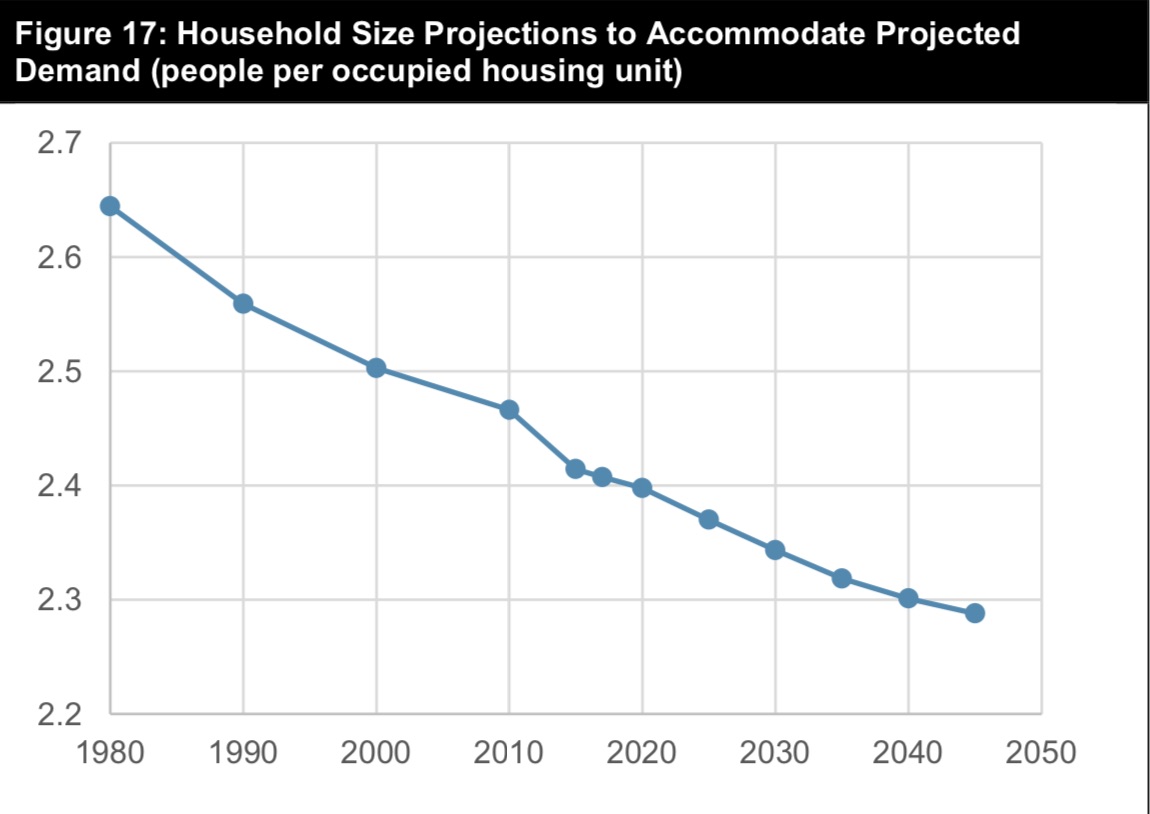 Up for Growth, and ECONorthwest are non-profit planning organizations. They put out a report in 2020 called "Housing Underproduction in Washington State", found Here. It concluded on page 11 that Thurston County had no underproduction of housing.

Conclusion: Although we definitely need more low-income housing units to accomodate the 42% of Olympians that c an't afford rents greater than $1100, in general, we're not in a crisis that would justify putting large multifamily housing in single-family neighborhoods.

Missing Middle has no ability to stop people from building in the suburbs if they can't find single-family housing in town. As mentioned elsewhere, 82% of those wanting to buy housing, and 47% of renters, want single-family homes. Eliminating near-town single family neighborhoods may actually accelerate suburban sprawl.

Unfortunately, in studies of cities that have tried MM-type infill years ago, only 2.2% of housing turns over per year in normal markets, and 1.5% in hot markets. This means it would take 32 years for lower-income renters to see an improvement in supply and rent, and in hot markets, 47 years. As has been seen in Seattle, increasing the supply of higher-end apartments brings down rents only for higher-end renters, while lower-income renters see rent increases and displacement. See here.

Basically, filtering says "If you build more Teslas, the price of Ford Festivas will come down." It's just "trickle-down" housing.

The most effective way to create lower-income housing is to build it directly. See here.

As mentioned on the "Supply-Side Causes of Unaffordable Housing", putting large profit-creating buildings in single-family neighborhoods increases rents and prices. Newly-constructed buildings are more expensive. They command higher rents and can produce higher profits. Nearby properties now also have this potential, so their property values, taxes and rents go up. Original residents can't afford these new taxes and rents, and so have to move somewhere else (displacement). Meanwhile, the assets of the neighborhood, green space, light, space, non-transient residents and knowing neighbors become less and less likely. Forever.

Bank loan officers have a rule of thumb that a landlord should charge at least 1% of a building's cost in monthly rent to make a profit. Housing with minimum rent would require a minimum building price. This would require a small square-footage housing unit with a low cost per square foot. A $100,000 ADU would have a minimum rent of $1000 per month.

The cheapest housing to build is a small apartments in a large apartment building (>12 units) on arterials, followed by tiny houses, manufactured homes, and attached ADUs. Duplexes, triplexes, fourplexes and townhouses are more expensive. So the types of housing already allowed in single-family neighborhoods, along with apartments on arterials and feeders,  have the potential for the cheapest rents. Not so with proposed Missing Middle housing.

Then why don't the City and State publicize it to convince people of the need for Missing Middle-type housing? What has been proven is that density will increase, and beyond density limits.

Missing Middle is just a theory. Most of its claims are untested. But research has shown that eventually,  people don't like their own neighborhoods anymore, housing gets less affordable, larger multifamily buildings are built only by investors with deep pockets, and local control of the neighborhood wanes.

The City of Olympia has made no attempt to calculate how significantly (or if) rents might decrease with added MM housing supply.

No attempt has been made to inventory which neighborhoods' streets, parking, sidewalks, sewer, and storm water treatment could actually support a large increase in density.  No consideration of individual neighborhoods' existing density, income profile and diversity was made.

No attempt was made to involve Olympia residents in the creation of this plan.

The most-affordable houses are found in lower-income neighborhoods. They would see greater impacts, and more teardowns and gentrification, than higher-end neighborhoods. This is never mentioned.

In Seattle's Central District, gentrification began in the 1980's. Studies supporting Missing Middle housing recently found that racial diversity increased in the neighborhood, because the mix of races changed. The percent of black residents decreased from 73% in 1980 to 14% in 2019. Instead, it was just gentrification. More affluent white renters and the buildings and businesses that were built to house them appeared, and poorer black families saw prices, taxes and general cost of living increase. This forced them to move to cheaper parts of town, or out of town. See here. To see a PBS video about this process, go here.

This is called gentrification. It isn't limited to black or poor neighborhoods. It can erode the affordability, diversity and sense of community in any moderately-priced neighborhood. Corporate-driven gentrification can reduce local owners and landfords, the most affordable houses, home-ownership rates, and renters' control over their living expenses. If the owners aren't local, money is going out of town, not staying in the community,

In Olympia, unfortunately, there are few people of color. The main diversity would be economic. The greatest economic diversity is found in the older, cheaper neighborhoods. These are the same neighborhoods that would be first targeted for redevelopment if larger MM-type housing is allowed (See here)

6. Our neighborhoods have adequate infrastructure to significantly increase density

Many of the olderneighborhoods in Olympia have combined storm water and sewage into the same pipes, reducing critical capacity (areas in green at right).

In addition, a few areas in northeast Olympia are still on septic systems (red dots below) 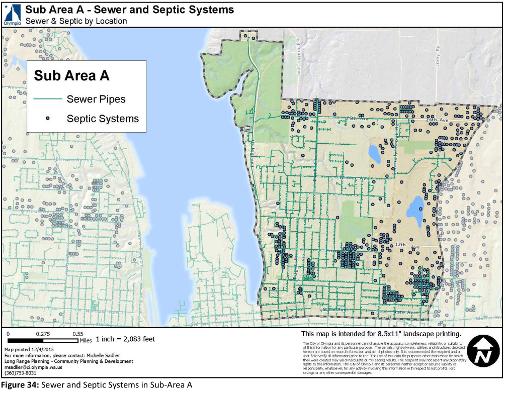 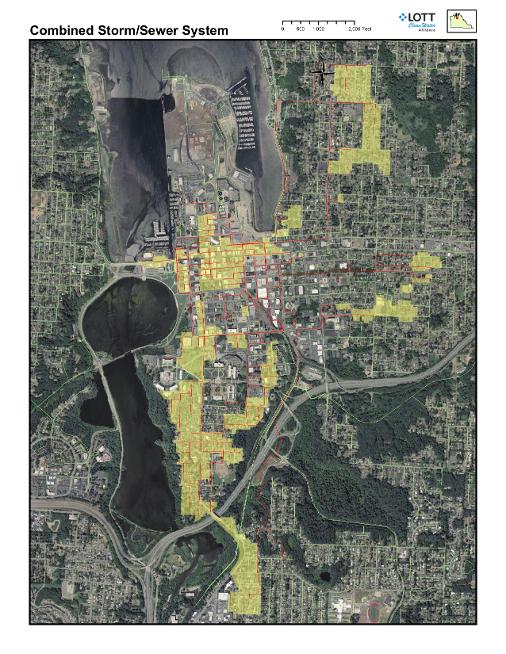 7. MM-type housing in neighborhoods will increase use of public transit

In the Northeast and Eastside neighborhoods, there are areas with no sidewalks, or sidewalks on only one side of the street. With decreasing parking requirements, walking to transit can be more hazardous.

Transit in Olympia is found mainly on arterials and feeders, some running just a few times a day. Missing Middle-type development directs higher-capacity buildings to all parts of neighborhoods. Most of those areas are well-over two blocks to the nearest bus stop. In a way this places higher concentrations of people away from transit.

Many driving trips are due to people working a distance from their homes. Reducing driving trips depends most on locating people closer to their jobs. However, fewer than 50% of Olympians live and work in Olympia (see chart at right).  It's unknown whether MM-type infill would make any difference. Certainly it hasn't been studied and publicized. Go here, Figure 41. 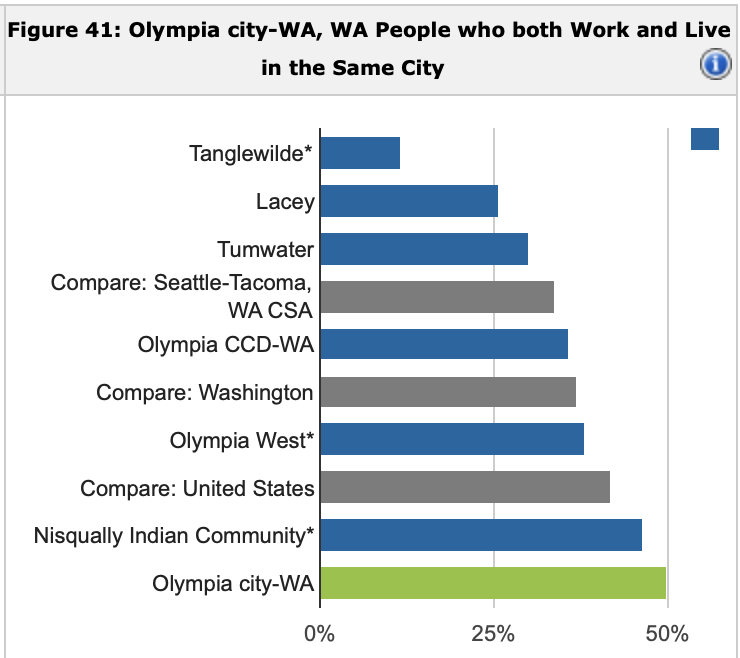