Why weren't people in Olympia told and polled about creating a Missing Middle-type housing plan ?

We don't know, but have our suspicions.

During the first Missing Middle "process," the plan was developed and finalized behind the scenes. Neither the public nor neighborhood associations nor subarea groups were notified that the plan was being created.

Olympia generally keeps its residents well-informed about things like recycling changes, Christmas tree pickups, water quality, etc. with glossy brochures included with utility bills, or with banners above State Avenue. But not for Missing Middle. Unless you were working with the City, you had no idea.

A handpicked committee with no power reviewed the MM plan and made no changes. An online survey providing only generalities in describing MM (the details are the alarming part) was put out, but again, there was no general announcement that it existed. This was meant to be kept a secret until its passage, because MM advocates knew most residents would not want this plan.

There ARE some  cities that solicit their citizens' opinions in the planning process; even one as complex and huge as Missing Middle. Raleigh, North Carolina did an extensive survey of its residents to find their preferences and fears about Missing Middle-type housing. The link for the full study is below, but a summary of findings is shown below-left, next to the diagram showing the more-common concerns as bigger circles.

About 10,000 residents were polled. In all races and age groups (60 to 75% or more had concerns about new housing proposed. The biggest, large to small, were:

•Green space and canopy being lost

• New buildings would be too big

• Houses would be too close together

At right is a graphic showing, with circlesize, relatively how important each concern was. 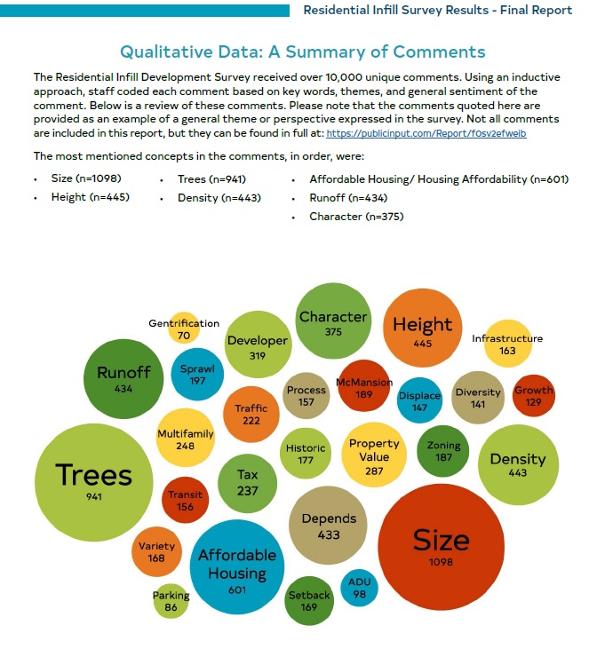